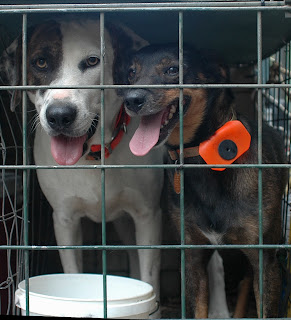 I spent two days last week hunting and fishing at Caddo Lake with my old friend Donny Lynch. May squirrel season is on in East Texas, bream are bedding, and we're having an unusually cool, wet, and pleasant spring.

Donny hunts raccoons and squirrels with mountain curs, feists, and rat terriers - serious meat and hide dogs. He hunts every day; I feel like the rankest beginner every time I visit him.

Caddo Lake, with it's cypress breaks, moss-draped oaks, and sloughs is last thing most folks picture when you mention Texas.

We started out after bream - red-ears and bluegill - in mid-afternoon. Donny, practical meat fisherman that he is, rigged up with floater and number 10 hook baited with a crawfish he'd netted in a creek that runs through one of his 'coon hunting hot spots.

I, gentleman fly fisherman that I am, started rigging up with a woolly worm - my never-fail bream fly. Donny hauled in two or three whoppers while I screwed up a couple blood knots. Over the next hour, it became obvious that Caddo Lake bream prefer crayfish to my lovingly tied flies.

In desperation I tied on a hair's ear nymph.

Donny said, "What's that s'posed to be?"

"It suggests the larval stage of various insects."

"I got a little cup full of the larva." He reached for his maggots. "Tie one of these on that little hook. Them brim will eat it up."

An hour later, we were back in his camp dressing a nice mess of bream.

We ate supper, waited for dark, then went coon hunting. He cast Ranger, a feist, and Whitey, a mountain cur, along the edge of some flooded timber. Within minutes, they struck and the chase was on. A few minutes later, they treed and we waded into to the flooded woods. Mind you, it was eighty degrees and pitch dark. Donny had a coon hunters lamp; I had a $5 flashlight. We found the dogs raising bloody hell around the roots of a huge fallen oak.

Donny said, "I smell a cottonmouth. Come here and you can learn what one smells like."

I know very well what a cottonmouth smells like." (a mild skunk odor) "I'm just fine where I am."

We never found the raccoon, though I know it was there somewhere. The dogs were just too worked up. Donny conducted a methodical search while I trained my light on any tangle that might hold a cottonmouth.

A few minutes later, another strike and another short race. This one ended at a hollow cypress tree in waste-deep water in the middle of a slough. I got to the dogs first; they were swimming circles around the tree, barking every breath.

Donny arrived and found the 'coon right off - a young boar that will go well with yams and cornbread. You can take the boy out of Kentucky but...

Next morning we headed to the woods for squirrels. As I write this three fryers are thawing in the kitchen. 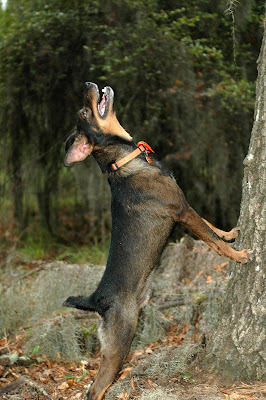 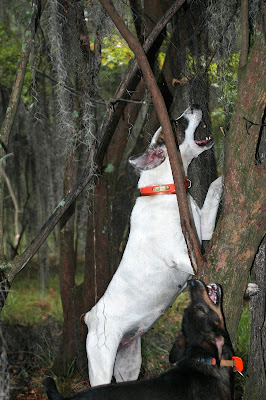 Whitey, a mountain cur, and Ranger working a tree. Donny said, "Old Whitey is eatin' that tree up!" We expected a squirrel, but they'd treed a 'coon. 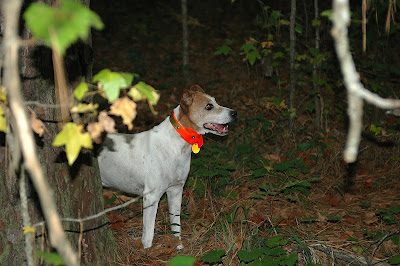 Chance a 10 year-old rat terrier stops to listen. Good squirrel dogs use their eyes and ears as well as their noses. 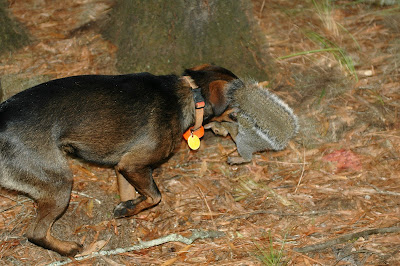 Ranger fetches a gray squirrel. He's as soft-mouthed as any retriever.
Posted by Henry Chappell at 7:06 PM