Home Range has moved! Check out the latest posts at http://www.byhenrychappell.com/blog.htm

Thanks for your support!

I'm working on another ranch book with the Wild Man of Benjamin, Texas. I spent several days last week at the Wagonhound Ranch in southeastern Wyoming, near Douglas. Tough going, let me tell you. Here's a little iPhone video from early Wednesday morning, complete with a shot of Your Humble Scribe's boots at the end.

Posted by Henry Chappell at 3:39 PM No comments:

Okay, varmint, I'm a comin' in after ye!

Cate having a fit over a squirrel holed-up in a hollow tree. Why are frustrated dogs so entertaining?


Posted by Henry Chappell at 3:14 PM No comments:

After 25 years of long quail hunting expeditions to West Texas, I'm enjoying short hunts close to home. I'm sure age has something to do with it, but, nowadays, with "serious" bird hunters paying tens of thousands of dollars per year for the best leases,  riding ATVs along baited ranch roads, and running small armies of pointers, an afternoon squirrel hunt with one or two dogs has a nice sense of proper scale.

The hunting is getting tough. Nature has done it's annual October to February thinning. Only the fittest remain.

Yesterday afternoon, I followed Cate into a gorgeous piece of woods. She treed only three times - first, a holed-up squirrel; then one  I simply couldn't find in a giant post oak; finally, just before dark, a fox squirrel that will go nicely with biscuits and gravy.

Small game season ends this Sunday. Cate is in her prime, lean and tough from regular hunting. But the frayed, faded collars on my bookshelf remind me how quickly the years pass. We'll enjoy one or two more squirrel hunts this week, if we're lucky. There will be a few nighttime 'coon hunts in February, but I have a book to finish and some challenging magazine work. Like an old dog that can't hunt two days in a row, I can no longer put in a good day's work after spending half the night in the woods.

I regret every second I've wasted. 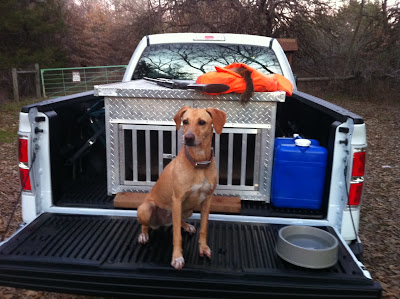 Posted by Henry Chappell at 2:47 PM No comments:

This past Friday, December 30, my father would have been 91. I had a challenging piece of work planned, but at sunrise, halfway through my second cup of coffee, I knew I'd be going to the woods. 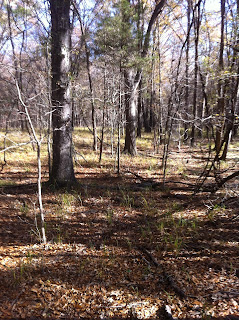 Early afternoon, in shirtsleeve weather, I cast Cate east along a certain creek in Lamar County. I didn't expect much in the way of game then. There were no pleasant surprises the first couple hours, but no shortage of pleasure. Were I a more efficient hunter, I'd have saved our energy for the last two hours of the day, when squirrels and other diurnal wild things stir before denning. 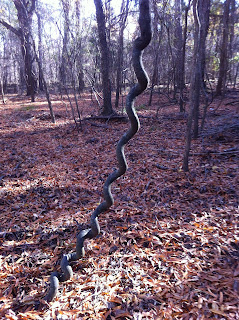 Why do dogs always prefer the far side of the creek, especially when you aren't wearing hip boots?


Just after sundown, with barely enough light, I cleaned the day's bounty on the tailgate. For a few minutes, I knew only a snoring dog, tired back, bloody hands, the feel of feathers and fur, the smell of life and death, cedar and a cooling creek bottom. We humans are simple creatures, but we have long memories. ﻿

Posted by Henry Chappell at 10:05 AM No comments:

Of course I had to comment on the H-A-I-R. Cade just shrugged and said that's the way he and his skater buddies wear it out in Southern California. I said he looked awfully 1974. He mumbled something about cavemen and barbers.

I get my grandson a few days every hunting season, and a couple weeks every summer, during which we  set out jug lines for catfish, talk about hunting dogs, and make elaborate plans for our next squirrel hunt.

When Cade was eight, I told him I'd get him a .22 rifle when he turned 12. I thought I had plenty of time. This past September, it occurred to me that he'd be 12 when he arrived for Thanksgiving. A few weeks later I visited a certain gun shop. When the avuncular fellow behind the counter asked if he could help me, I said, "My Grandson just turned 12."

"May I suggest a bolt-action? We wouldn't want to encourage hasty aiming."

Half an hour later I walked out with a new rifle and the realization that I was about to lay a firearm - not a BB gun, not a pellet gun - in my grandson's hands. How did my father handle the task with such apparent equanimity?

Of course Cade did fine. He'd been handling air rifles for years while I harped on safety.

For our hunt, I let Cade carry my light 20-gauge. Gray squirrels can be a challenge for even expert riflemen. He'd have a better chance with the shotgun. He carried his shells, but could load only after Cate treed and we were in position.

Cade is back in California now, and his .22 is locked away in the safe. The best hunting of the season lies ahead, in late December and January. But the best part of the season ended the Saturday after Thanksgiving.
Posted by Henry Chappell at 2:59 PM 1 comment:

After much procrastination, I've updated my website, adding links to recent magazine work. I hope you'll take a look at "Black Bear Recovery in Texas," "The Texas Horned Lizard," "A Light in the Wilderness," and a bunch of Texas Wildlife working dog columns.
Posted by Henry Chappell at 1:05 PM 2 comments:

Age and throat cancer have taken their toll, but the great John Prine's voice has only grown more interesting. This is one of  my favorites.

Posted by Henry Chappell at 12:53 PM No comments:

Here in North Texas, despite recent rain, we're still in the midst of what has been shaping up to be the new Drought of Record, one worse than the disastrous drought of the 1950s. Other parts of the state have been in even worse shape. Ranchers have been selling off cattle. Tens of thousands of acres have burned. Wildlife has suffered horribly.

I probably won't hunt quail this year. The annual census reports the lowest count on record. Although I might hunt woodcock in the Pineywoods this coming January, I consider Maggie, my beloved old bird dog, retired. She may be my last bird dog. There have been too many years of running talented dogs into the ground for one or two coveys. It takes wild birds to make a good bird dog, and my last two have come nowhere near their potential.

Treeing dogs are another matter. A few years ago, I realized that I simply wanted to hunt with dogs, and that I needed to adjust to changing realities.

I can't believe she's already four years old. She hit her stride last season in large part because I can get her into game a couple times a week without driving halfway across the state.

Still, this season started off hot, dry, buggy, and slow - an extension of the summer that wouldn't end.

But there were plenty of fox squirrels in the oaks along creeks that feed the Red River. And a billion leaves that made finding squirrels nearly impossible. And hollow trees:

Nevertheless, Cate and I added game to the freezer, and I applied various ineffective goops to bug bites and poison ivy welts.


Mid-October, I headed to deep East Texas to hunt with my old friend Donny Lynch and his nephew Nathan Lynch. Hunting with the Lynch Boys is serious business.

A good season so far. Now we're having our first real cold snap, and I find myself looking at a graying bird dog and thinking about the Pease River breaks in the Panhandle, rough pastures of little bluestem,  prickly pear and cholla, and bobwhite quail that used to be there.
Posted by Henry Chappell at 5:46 PM 2 comments:

Back on the Road

Here we go again. Another blog revival. Why bother after a year-long hiatus?

Beats me. It just feels like something I need to do. This past year has been the busiest of my writing career, and I don't see things letting up anytime soon. Still, I have some things to say that don't quite fit in my books and magazine articles, and there's the restorative effect of fall after a brutal summer here in Texas.

Many thanks to my fellow bloggers who've kept me on blog rolls during my long absence. I hope you'll bear with me as I get back into the rhythm. As always, I'll be all over the place, from the hunting and nature writing people expect, to more philosophical postings. As much as possible, I'll avoid politics, but I'm sure something will send me around the bend, and I won't be able to help myself. In those instances, I'll have to ask for your indulgence. I promise not to be nasty and hope you'll return the favor.